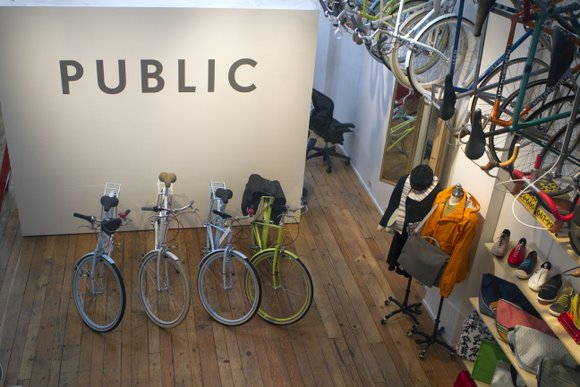 PUBLIC bikes are built to be savored.

Their sleek simplicity is pure urban eye candy. Their signature colors are mouthwatering mandarin orange and the pale baby blue of birthday cake frosting. And that decadence is more than frame-deep.

“They ride like butter,” said Dan Nguyen-Tan, the company’s spokesman.

Based in San Francisco, CA, PUBLIC sells crave-worthy commuter bikes, but their brand is a lip-smacking hybrid of retro utility and ultra-modern design. So, it’s not surprising that the man behind the brand is a star in the art world. Rob Forbes is the founder of Design Within Reach, a modern furniture retailer that exemplifies a clean, simple aesthetic. But long before he imported his first Danish armchair, Forbes had a love affair with bicycles. In 2010, he created PUBLIC bikes to put his passion for pedaling within reach of the general masses.

“Sometimes he jokes that he spent years getting people on couches at DWR and now he’s inspired to get people off their couches with PUBLIC,” Nguyen-Tan said. “Rob has a strong passion for design – bicycles as a design object that provide significant social and personal well-being benefits – and urban design as it relates to how we build communities.”

To meet those two missions, Forbes debuted with a modest fleet of city rides: single-speed, seven-speed derailleur and three- and eight-speed internal hub bikes in three different frame models – diamond, mixte and step-through. The colors were inspired by, among other objects, a 1968 Vespa scooter. The frames drew from elements of the “double diamond” – a style that flourished in 19th century Britain. The prices cater to the general masses, starting at less than $500 USD.

The one-word company name sums up Forbes’ desire to serve cyclists’ present needs while pushing the envelope for a better future. PUBLIC bikes, Nguyen-Tan said, are for everyday people who commute to work each morning or pedal to the farmers market on the weekend. Their steel frames have been field-tested and endorsed by members of the public, such as Bert Hill, a safety course instructor for the San Francisco Bicycle Coalition. While the ride itself is seamless, the company aims to make a statement.

“The quality and usage of our public spaces is a measure of the success of our democracy,” Nguyen-Tan said. “That is why we call ourselves PUBLIC. We want to help in our own way. Our vision is for a time when we think as carefully about the way we get around on an everyday basis as we do about what we eat, how we dress and how we furnish our homes. It’s not a utopian or unrealistic vision. In most modern cities in and outside the US, people make daily choices between trams, buses, walking, cars, trains, bikes, scooters, ferries and other transportation alternatives.”

But PUBLIC doesn’t let politics overshadow style. They blur the line between advocate and artist. “We want PUBLIC bikes to be visual statements about joy and simplicity,” Nguyen-Tan explained. “These bikes should make you feel like a kid again, and this is every bit as important as anything else. We also want to be the most female-friendly bike company, and that’s reflected in the mixte and step-through frame bikes that we offer.”

Clearly, there’s an appetite for PUBLIC’s aesthetic. Their store in San Francisco’s South Park neighborhood is bustling. Their bikes are now seen in retail shops from San Diego, CA, to Boston, MA, and the list is growing quickly. PUBLIC also offers a “Ready to Ride” option, which allows customers to buy online and have their purchase shipped – 99 percent assembled – anywhere in the US. “We’ve gone from concept to validation in less than one year with thousands of customers,” Nguyen-Tan said.

And those customers aren’t shy to report that their bikes put them in the spotlight. “The most common feedback that our customers share with us is that they’ve never ridden a city bike that gets the level of joyful attention that our bikes elicit from friends and strangers,” he added.

Building bikes that cater to design geeks, fashionistas and public space revolutionaries? Clearly, PUBLIC has designed a recipe for success.