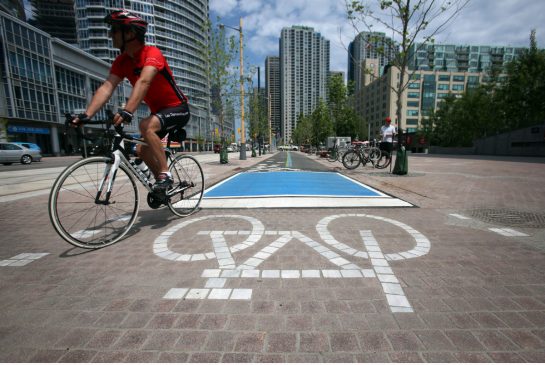 The Editor of the Star’s Automotive Section calls for dedicated, separated bikelanes on almost every road. A sensible write-up that advocates for Vision Zero (that NO ONE should die on the road) and safe infrastructure for all road users… it helps that there is evidence from right here in Toronto that bikelanes actually HELP drivers get around the city.

The bike lanes I’m talking about should be segregated, either by built-in pylons or a concrete curb like the lanes recently opened on Queen’s Quay in downtown Toronto.Although anything that involves change is difficult in the beginning, repetition breeds success. Witness the never-ending traffic jams when the reconstruction of the Gardiner Expressway was taking place. Unbelievable in the beginning, drivers eventually learned how to cope. Same with the temporary HOV lanes imposed for the Pan Am Games: chaos the first couple of days and then acceptance and adaptation.

Which is the way it would be, I’m convinced, with all-out bike lanes.