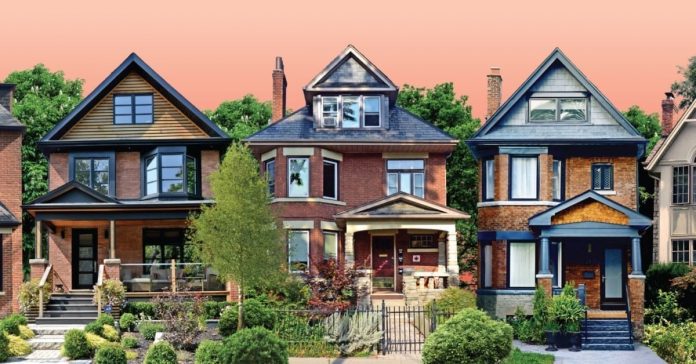 Toronto may be an interesting place to live for a number of reasons, a city noted for its diversity. It would be really beneficial to learn about the top Toronto communities to live in as you relocate to this city. However, you should be aware that due to the city’s high housing prices, purchasing or renting a home in this city is a major undertaking.
Toronto is bordered by every type of neighborhood imaginable, including family-friendly car-friendly suburbs, ancient, established cities with brick-clad housing stock, vibrant towns with many work possibilities, and more. The options are virtually limitless, as are the pricing points.

Toronto, Canada’s largest metropolis, has a plethora of communities that are continually changing with the passage of time. We will tell you the essential characteristics and data about each part of the city based on the top 10 Best Neighbourhoods to Move to Around Toronto below so that you can make an informed decision when deciding where to live in the city.

In 2018, Maclean’s magazine has placed Oakville, Ontario, Canada, as the third-best location to retire to in Canada, the fifth-best place to raise a family, and the fourth-best area for new Canadians to reside. There is a good justification for that. Families that want a small-town experience settle in Oakville.

Oakville is one of the most established Ontario municipalities — it became an important commercial route from the early 1800s due to its natural harbor, and the attractive housing stock further adds to the impression.

There is a great deal of pride among the locals over the area’s heritage, and local historical groups provide guided tours and arrange activities to help inhabitants better understand the distinct architecture. Brick’s textures are totally different from the high-rise glass buildings in Toronto, and it preserves the human scale and encourages communal consciousness.

The Mayor of Oakville, Ontario, Canada, told Macleans that “Oakville is a city that refers to itself as a town and behaves like a village.” Oakville residents are keen to keep the town vibe in Oakville. Oakville has an undeserved reputation of being only for the wealthy. Although in actuality it’s a terrific place for the wealthy, it’s also a great area for the middle class.

According to the Toronto Real Estate Board, the average cost of an Oakville house is $994,376. A detached home will cost you approximately $1,310,234, which is the same as what you would pay in the 416, but other property types are cheaper. The most you can pay for a single-family home is $815,992, while townhouses start at $550,823, and condos start at $545,722. That falls within driving distance of Toronto’s property costs

Oakville and Tecumseth share many of the same community values. Canadians are always ready to offer a helping hand, and the city is among the most stable in the country.

Despite it only coming into existence in 1991, the actual origin of the expression dates back far further in time, all the way to the early 1800s. It also contains Victorian-era structures in the downtown area and in Tecumseth, Ontario, Canada’s first steam railway became a tourist attraction.

However, these differences are substantial. Due to it being a combination of three smaller rural villages (Alliston, Beeton, and Tottenham), the community of New Tecumseth is very remote from city life (even though Toronto is just a short journey south).

People who want to spend their Sunday’s canoeing, bird watching, or going to a major annual festival like the Potato Festival in Alliston, the Honey and Garden Festival in Beeton, or the Bluegrass Festival in Tottenham go to the municipality of New Tecumseth.

Being able to enjoy a country lifestyle at one of the GTA’s most inexpensive costs is pleasant to know.

Single-family homes with enormous lots and acreage are seen on properties that sell for $604,534. That is cheaper than the average detached home in the GTA, which costs around $300,000 more than that. Also, just under two-thirds of all condo sales go for $316,500 or less, over $200,000 less than the average.

The suburb of Milton is listed by Maclean’s as the 6th greatest place to live in Canada for 2018.

There is an element of shock in everyone’s reaction to the expansion of the city due to its reputation as one of the fastest-growing cities in Canada.

The small town in which it was established has virtually converted itself into a thriving suburb suited for young families. It’s secure, with high-quality schools and childcare facilities. Both the endless tract housing and the town’s historic feeling exist in balance with one another.

The place has plenty of value and appreciates quickly, so you receive a lot of houses for your money. On the whole, prices for property stand at $769,950. Most sought after by buyers are single-family homes that are valued at $934,969. As the population rises, the density increases, which lowers the average cost of townhouses and condos.

Newmarket, a Quaker town north of Toronto, has grown greatly since its founding in 1800. Its former population of mostly farmers and furriers has grown to approximately 85,000 diverse and highly qualified people. But since it happened gradually over time, rather than in a flash, it has retained much of its individuality. It boasts a charming Main Street and spacious single-family residences.

Newmarket’s residents adore its position. It’s located between Toronto and cottage country, making it ideal for families who want to enjoy both the outdoors and the city. You can easily get to the city by driving down Yonge Street or using the Go Train. Similarly, the 400 or 404 motorways provide easy access to cottage country.

Newmarket has a solid economy with many jobs, particularly in healthcare.

Whitby, an hour east of Toronto, was the province’s initial capital in the 1800s. Even though its population has doubled since 1986 to just under 130,000, it nevertheless maintains a small-town feel.

Families adore the vast areas and economical detached houses with a backyard and driveway. They also like the town’s newer plazas, roadways, and parks. It is one of the least diverse towns on this list, which can be a disadvantage for some.

But its strong local manufacturing industry is a significant plus. This city is home to GM, Gerdau Ameristeel, Lear, and Patheon.

Although theoretically within commuting distance of Toronto, homeowners may readily find work in the city, which may reassure buyers who are forced to relocate due to price pressures.

Independent and unique, Kensington Market is one of Toronto’s nicest neighborhoods. Parking and driving through the tight streets are difficult, so walking to the commercial district is preferable.
In the neighborhood are a variety of food outlets selling meats, fish, and fruit. There are also bakeries, spice shops, and cheese shops. There are new and used clothing stores, as well as discount and surplus stores. It also has many eateries of all types and races. The front extensions of numerous buildings are a distinctive architectural element of the area (which would be against by-laws in other places). Many of the older ethnic businesses have been replaced with luxury cafés, restaurants, and clubs in recent years. Many believe Kensington’s lengthy history as an immigrant working-class enclave is coming to an end.

East Chinatown is a Chinese neighborhood in the eastern part of Toronto, Riverdale, and one of Toronto’s multiple Chinatowns. It formed in the early 1970s and lies between Broadview Avenue and Carlaw Avenue on Gerrard Street East.
The area is the only Chinese archway in Toronto to be opened to the public on 12 September, with its formal construction beginning in late 2008.
The establishment of the channel was largely attributable to efforts by Valerie Mah, who joined Councilor Paula Fletcher in the Chinese Chamber of Commerce in East Toronto. A renowned worldwide prize for the best design and implementation of the surface parking lot in 2012 has since been presented at the archway and parking area next door.
The question “where is the best neighborhood to live in Toronto” is not answered definitely. Chinatown, while home to the huge Chinese community, is busy and offers a very wide range of fruit and vegetables. The developing East Chinatown of Toronto is thus now being made a choice for the city’s new inhabitants.

The environment is calm, yet there are several dynamic towns in the vicinity. You can therefore always drive for a pleasant night in the surrounding districts.

In High Park North, you’ll find yourself in a village-like setting. It’s a wonderful respite from the rush and bustle of downtown. There are several high-rise flats and residences in this area. Located to the south of the suburb, High Park boasts 400 acres of green space, making it one of the largest parks in North America. There are more than 1,600 parkland areas in Toronto, covering a total of 8,000 hectares. High Park is the largest of them all.

Numerous people have become disoriented while exploring the park, which is home to countless ducks, birds, and squirrel species. Here you’ll find tennis courts, baseball grounds, soccer fields, monuments, Chinese gardens, a labyrinth, a wildlife park, a cafe, and a swimming pool, among other amenities and attractions.

To get to downtown Toronto from High Park North, take the Bloor-Danforth TTC subway line to Dundas West, Keele, and High Park. It takes about 20 minutes to get from High Park North to downtown Toronto. In addition, the TTC offers local buses from each of its subway stations. Taking a cab from the downtown core up to High Park will cost you roughly $30. As the TTC closes at 2 a.m., night owls may find themselves doing this more often than they intended.

Toronto’s Yonge Street and Eglinton Avenue crossroads are centrally positioned for rapid access to downtown – just hop on Line 1 and you’ll be there in 20 minutes. It’s possible that you won’t even need to travel far because Yonge & Eglinton has so much to offer on its own. Affluent residents inhabit much of the region, however, some inexpensive housing may be found in the vicinity. The area is particularly popular with young Irish and British employees. The Eglinton Mall and Cineplex are only two of the many attractions in the region, which also include a wide variety of retailers and eateries. One of the most popular portions of midtown for twenty and thirtysomethings in this area since you can have a wonderful night out without having to go downtown.

To go downtown or further uptown, the Line 1 subway is a convenient option. It’s easy to get from east to west on Eglinton Avenue thanks to the 32 and 34 buses. And the city is presently building the Crosstown LRT, a new light rail transit route that’s projected to boost east-west transit along Eglinton Avenue. For now, the neighborhood will experience traffic difficulties until 2021, when the project will be completed.

Scarborough wasn’t much more than a small collection of farms and smaller settlements when Europeans first migrated there in the 1790s. This metropolitan area has evolved tremendously and has a lot to offer now that it has merged into the city of Toronto.

Despite its size, it has a diversified population, thanks to successive waves of new immigrants over the years. Living in this bustling, the interesting city offers a wealth of things to see and do.

There is no shortage of places to eat in Scarborough. The neighborhood is home to a variety of restaurants that serve dim sum, bento box lunches, and sushi as well as other delicacies including ramen, roti, and ramen noodles. Crime rates in Scarborough are three percent lower than the rest of Toronto, according to Toronto Police. A reputation for high crime rates in Scarborough is baseless and numerous municipal councilors have spoken out against it.
Shopping in Scarborough is another terrific reason to stay there. The Scarborough Town Centre has a wide range of fashion selections.
A comparatively cheap average monthly rent of $1,067 can be expected in one of the GTA’s major business districts. You’ll be able to afford homes and rental apartments, but you’ll still be close to Toronto.