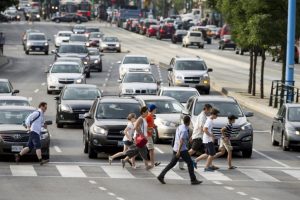 Jenna Morrison was 38 years with a five-year-old son and another child on the way when she was struck and killed by a truck while riding her bicycle one fall day in 2011. The incident at the corner of Sterling Road and Dundas Street West galvanized Toronto’s cycling community. Throngs of cyclists joined a memorial ride through the streets of the city to mark the tragedy and call for better safety measures. They left a “ghost bike,” painted all in white, at the place where Ms. Morrison was killed.

Cyclists have become a well-organized, outspoken and influential lobby in recent years. They fight for more bike lanes, more bike parking and safer streets. They make authorities wake up and take action. Pedestrians are not nearly as forceful. It is time they found their voice.