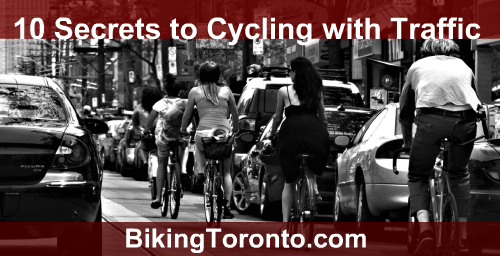 BikingToronto have seen us publish 10 “Secrets” to Cycling with Traffic.

These aren’t secrets of course, but they are things that new cyclists sometimes don’t know… so we thought we’d publish a series of them to help people new to riding their bikes around Toronto (and other big cities) learn a little more a little faster.

1. Drivers Don’t Want to Kill You

It’s hard to believe sometimes, because sometimes drivers pass bikes a bit too closely and scare us, but it’s true.

Drivers Don’t Want to Kill YouThey may not be your biggest fan, and they may think you are in their way, that you are too slow, that you don’t belong on the road, and they may be a bit jealous of your tight cycling butt, but most of them are not homicidal. 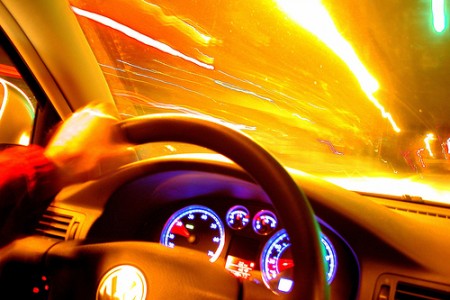 They may seem scary because they are seeing things from a drivers’ perspective, and often have not given much thought to how vulnerable cyclists are. The vast majority of drivers don’t want to kill you… they just don’t understand you. As well, the very LAST thing 99.99% of drivers want to do is hurt someone.

A lot of drivers are also cyclists (and vice-versa) and don’t want to be in a collision with you.

I bet any cyclist you know with a drivers license can tell you that knowing things from a cyclists’ perspective has made them a much better driver.

Knowing this one thing will give you a lot of confidence.

2. Ride in a Straight Line

Don’t ride in the gutters and then swing out into the road to avoid the drains. This throws drivers off-guard because they aren’t thinking about the drains and aren’t expecting you to do this. There’s a very good chance you’ll get honked at if you do this, because nothing scares a driver more than a cyclist swerving in front of their car.

Ride In A Straight LineInstead, imagine that the entire length of the road is lined with gutters. Ride at least that far away from the curb. It’s hard at first, because you may be afraid of those cars driving beside you, but most drivers will pass you at a safe distance the further you ride out from the curb.

This also applies when there are a lot of parked cars… instead of swerving in towards the curb between parked cars before swerving back out again, keep riding in a straight line… it makes you more predictable to car drivers.

3. Play by the Rules

You and your bike constitute “a vehicle” according to the Highway Traffic Act. This means that you have to abide to the same rules that drivers do. This means stopping at red lights, stopping for people at crosswalks, and not passing open streetcar doors.

This is really important because if drivers see you respecting the laws, they are more likely to respect you. On the other hand, if they’re stopped at a red light and you blow right through it because (hopefully) the way is clear, they are going to be mad at you.

Why should they treat you like a vehicle with a right to the road if you don’t behave like one?

The next time you get to a red light before cars do, DON’T put your right foot down on the curb. I know it’s tempting as it’s a handy little footrest, but if you’re right beside the curb, any drivers that come up behind you will drive up beside you on the left (often too close) and you’ll be “squeezed” when the light turns green, having to wait for that car to go before you can. 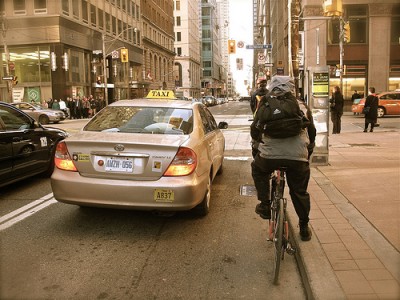 Instead, when you get to the red before cars, swing out a little to the left (I usually stop about 1/3 of the way between the curb and the next lane), and lean over to the left, putting your left foot down. This forces drivers to stop behind you, and gives you “first dibs” when the light turns green.

Drivers are trained to look for signals. Stoplights, stop signs, turn signals, brake lights… all of these things catch the attention of a driver. It’s what they look for to make sure they don’t hit anyone. Letting them know that you’re planning on turning, or coming out into the road more to pass a parked car is just courteous and polite. 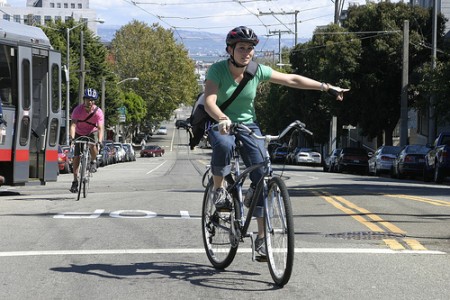 Hand-signals can be confusing to drivers… pointing up means turning right? That’s confusing – especially for drivers who don’t know about cycling. They may have learned these signals back when they were 16 and getting their driver’s license, but they’ve long since forgotten them.

A far more sensible way to signal (and it’s perfectly legal) is to point in the direction you’re going. It keeps everyone on the same page. Do it well ahead of any turns, so that drivers know that you’re planning to turn, and they can act accordingly to avoid you.

This is just what it sounds like. Taking your place in the middle of a lane because it’s unsafe at the edge of it.

This is mostly done on streets where the traffic lanes are not very wide, so it’s not safe for you and a car to be side-by-side. You need to be safe while out there on the streets, so you bike in the middle of the lane, effectively “taking” it. Most of the time (especially downtown), you’ll be moving at the same speed (or faster) than vehicular traffic, so you’ll fit right in to traffic. 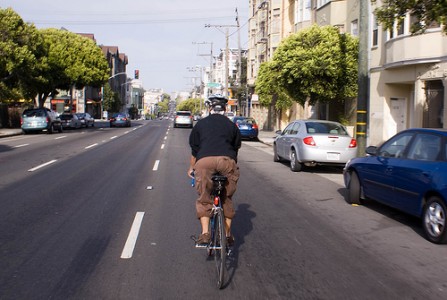 If you’re moving slower than traffic, remember that you’re a vehicle and have a right to be there if you’re abiding by the laws, and move out of the lane whenever you get a chance.

This is a tip not many people know. If I’m in a stretch of road where drivers are passing too closely or I just want more room, I look over to my left or over my left shoulder. Sometimes I’ll be looking at a store, or someone on the sidewalk, or down a street, but most of the time I’m just looking left for the sake of looking left. 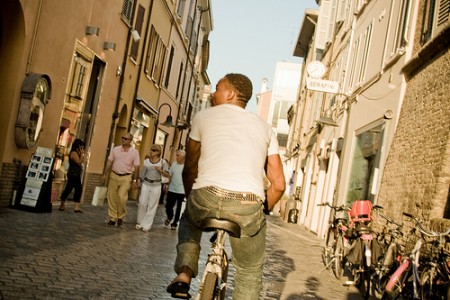 I’ve found that the simple act of looking over to the left is enough sometimes to give me more road space. Drivers, if they see you do this, seem to think that you’re thinking of moving to the left (even if you aren’t) and are checking to see if it’s clear. They don’t want to hit you, so they become a little more cautious.

If they think you may be coming left, they’ll give you more room. They don’t know you’re responsible and predictable and would signal before doing anything.

I don’t get a chance to do this often but the biggest factor when riding with cars is having a presence. It’s easiest to do this if there is more than just you biking.

Ride With OthersCars are more likely to see 2 bikes than one, 4 bikes than 2, 10 bikes than 4, and so on. The more bikes, the more chances that one of the people riding them will do something unpredictable, so drivers give groups of bikes (even those riding single-file) much more space than single riders. 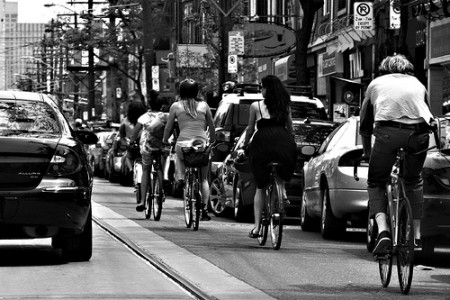 You don’t have to know everyone you’re riding with either… when the weather is warm, there are lots of bikes out on the street, and often you’ll find yourself riding with other people out there on the road. Notice that you’ll hardly ever have a close call with a car passing you too closely if there’s atleast 2 of you riding along. Not to say it never happens… it just seems to happen less.

The main thing to do is get out on your bike as much as you can… the more people see you out there having a good time, going faster than traffic in a fun, cheap, and pollution-free way, the more likely they are to try it too. The numbers of cyclists on the road has the potential to grow exponentially this way…. the more cyclists people see out there, the more people are curious to try it. Imagine if you saw groups of cyclists riding by you all day every day… you’d want to know what all the fuss was about!

This is also the concept behind Critical Mass. It’s easy for a driver in a car to bully one cyclist off the road, but stick a few (or more) cyclists on the road, and they take on the presence of a car… perhaps more than one car. There is strength in numbers.

One of the most common places that car-bike collisions happen is at intersections, and more commonly, when a car is turning right.

Being hit (or you riding into) a right-turning car is sometimes nicknamed the “Right Hook”, and the best way to avoid it is to not pass a car on the right hand side if it is turning right.

Avoid the Right HookIf you see a car waiting to turn right and you’re about to pass on the right hand side, the best thing for you to do is to slow down or stop and wait for the car to complete the turn. The rear-right blindspot to a driver is huge, and if a driver is not being especially vigilant, they will miss you approaching from behind on that side. So, slow down or stop and wait for them to complete the turn. 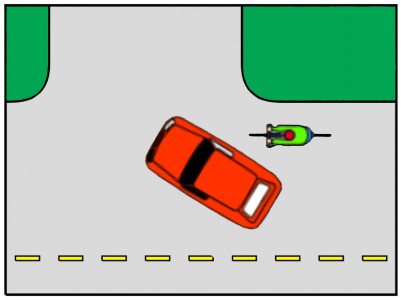 If the road is not busy and you have the option, head around the car on the left side to continue through the intersection.

The only, ONLY, exception to this rule is if you are 100% sure that a driver knows you are there on their right and are being nice and waiting for you to pass before they complete their turn. You’ll find nice drivers like this a lot downtown, as they are used to cyclists being everywhere. You still need to be careful and pass them with caution, and be sure to thank them as you go by (with a handwave, or verbally if their windows are open). 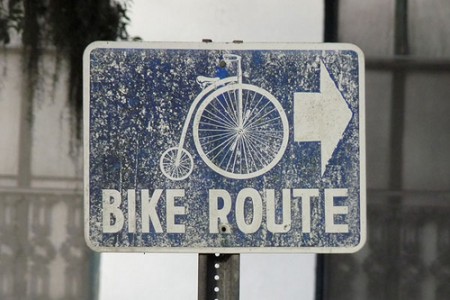 For example, I have a 10 km route to work, and I know through lots of repetition of this route where cars tend to slow down and speed up… where I have to be extra-vigilant and careful due to drivers thinking they can pass me safely when they can’t. I didn’t know all of this right away… it’s only because I take this route often that I’ve become familiar with it.

Thanks for reading our 10 Secrets to Cycling with Traffic. Feel free to comment on any of the posts (linked below) if you want to give feedback or have things to add to the tips (or even have entirely new tips that we should add to this series of posts).